Alcohol is not my friend

I like to think of myself as bit of a social gal. I love going out with friends for drinks and dancing & there's nothing better than enjoying a cocktail or two, or so I thought.

I was sick in the night. I woke up with the saliva quickly forming in my mouth & a quick dash to the bathroom. I am never sick from alcohol, so this was rare. I hadn't eaten anything but dinner all day, so that wouldn't have helped & I've had a sickness bug this week, so food intake on the whole has pretty much been on the low side.

I've decided that the aftermath of drinking, namely the horrific hangover and tiredness is just not worth the few hours of responsibility free thinking.

Most people will think this is hilarious as I love getting drunk! But I just think that I can't waste a day feeling like this, when a weekend is 2 days. Plus the money. I think I'm Richard Branson when I've had a drink & my salary does not cover that sort of behaviour.

So I'm seriously going to give this a go. I don't need a drink to have fun, I'll dance regardless, I'm naturally stupid, it should be easy.

I'll let you know how this goes after you see the next set of pics of me on Facebook with the girls!

In the meantime, here is a pic of me & the beaut of a hen, before we got hammered! 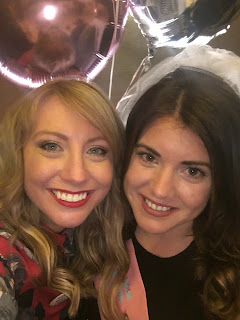